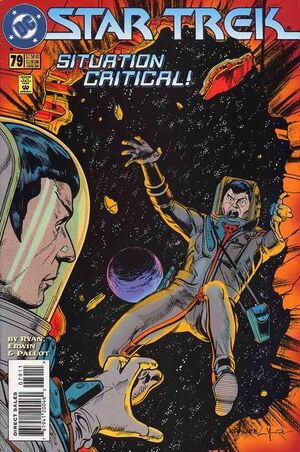 A scout ship patrolling the Neutral Zone has been destroyed and the Romulans deny involvement. Starfleet sends an ambassador to accompany the Enterprise, which responds to a distress call from Starbase 14. The starbase is devastated and its main reactor is unstable. A Bird-of-Prey arrives to investigate. Starfleet personnel form an uneasy alliance with the Tal Shiar to investigate the attack.

Retrieved from "https://heykidscomics.fandom.com/wiki/Star_Trek_(DC)_Vol_2_79?oldid=1458288"
Community content is available under CC-BY-SA unless otherwise noted.