Start a Wiki
Part of the 'Mandalorian Wars' event 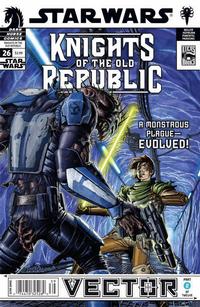 The second part of the biggest Star Wars story of 2008 begins with Mandalorians galore and ends with the arrival of a seemingly unstoppable threat!

Fugitive Padawan Zayne Carrick and his con-artist companion Gryph have fallen into a situation even more dangerous than the one they escaped on wartorn Taris—surrounded by enemies and trapped in close-quarters with a deadly agent of the group who framed Zayne for killing his fellow Jedi-in-training!

No one should miss "Vector"! This is Star Wars on its grandest scale-a galaxy-spanning, era-defining, sure-fire hit with fans both casual and hardcore!

Retrieved from "https://heykidscomics.fandom.com/wiki/Star_Wars_Knights_of_the_Old_Republic_Vol_1_26?oldid=1623438"
Community content is available under CC-BY-SA unless otherwise noted.