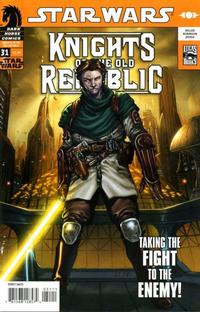 Zayne Carrick, a fugitive Padawan accused of the murder of his fellow students, is on his way to the authorities in hope of clearing his name, shedding light on the Jedi Masters who framed him, and revealing the covert order to which they belong. But reaching the right people without facing off against his former masters is proving to be more difficult than Zayne imagined! Success is going to require help from every true friend Zayne has garnered in his long quest for justice.

The secret Jedi Covenant is on the brink of exposure!

Retrieved from "https://heykidscomics.fandom.com/wiki/Star_Wars_Knights_of_the_Old_Republic_Vol_1_31?oldid=1623439"
Community content is available under CC-BY-SA unless otherwise noted.