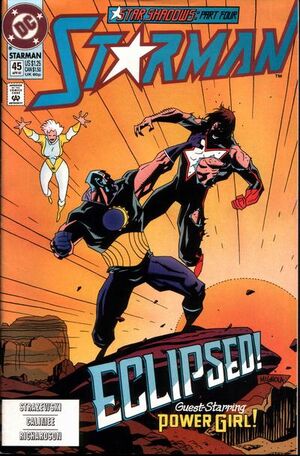 Oh, there is a little of me in everybody!

Eclipso enters S.T.A.R. Labs and captures Kitty Faulkner. Starman comes crashing into the Lab for the rescue. The two battle it out and Power Girl enters the scene. The two heroes take down Eclipso rather easily, and their foe changes back to Bruce Gordon. As Power Girl leaves to go back to the Justice League Embassy in Paris, she flirts and kisses Starman. Kitty becomes jealous and goes to tears. Starman comforts her and the two kiss and make up.

Retrieved from "https://heykidscomics.fandom.com/wiki/Starman_Vol_1_45?oldid=1458662"
Community content is available under CC-BY-SA unless otherwise noted.