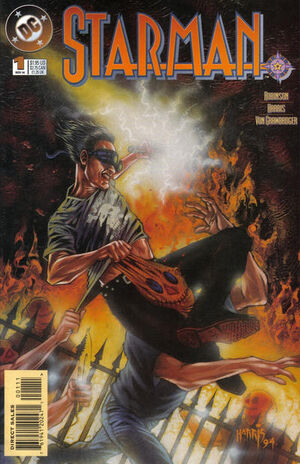 A pity you're dead, Jack Knight... that you cannot see what I've found. I wonder if... if you had lived, could you have been that which your father and brother never were. The champion this city has deserved and been denied these many years.

The largest crime wave to ever hit Opal City sweeps across the neighborhoods. The media begins referring to the event as the Night of Fire. Leading the various criminal gangs is Kyle – the man who murdered the new Starman. Now in possession of the Cosmic Converter Belt, Kyle is blazing a bloody path across the city.

Jack Knight arrives at the hospital and is treated for his wounds. Immediately afterwards, he visits his father. Ted Knight is angry and grief-stricken and wants nothing to do with Jack. Jack leaves his hospital room, where he meets the O'Dare family. Hope O'Dare attempts to explain to Jack how dedicated her family is towards Ted and his legacy, but Jack has little interest in speaking with her. He is overwhelmed by everything that has taken place in the past several hours.

The Mist telephones Ted Knight's hospital room and takes credit for not only the death of his son, but also for the Night of Fire. The Mist believes that Kyle had succeeded in killing Jack. He also threatens to take away Ted's "dead wife's memory". Ted calls Jack into the room and tells him to leave. He should get as far away from the city as possible.

After Jack leaves, he soon discovers what the Mist meant concerning his mother's memory. The Mist's goons destroy the Adele Knight wing at the Opal County Museum. Deciding to stay in the city rather than flee, Jack activates the Gravity Rod and takes to the sky. He flies towards the museum and engages a group of masked goons. Kyle arrives, but the thugs manage to chase Jack into the river. Kyle is certain that Jack survived, but is also certain that he dropped the Gravity Rod as well.

Meanwhile, the enigmatic Shade takes a particular interest in the affairs of Opal City. A longtime resident, he is at odds with the Mist's latest mindless rampage. He arrives at the Opal County museum and dispatches a group of would-be thieves. He manifests a creature of pure darkness from the folds of his body – a creature which literally consumes one of the criminals.

Later, Jack resurfaces downstream. He has lost the Gravity Rod, but knows that he cannot abandon his father. He has to go back.

Retrieved from "https://heykidscomics.fandom.com/wiki/Starman_Vol_2_1?oldid=1458664"
Community content is available under CC-BY-SA unless otherwise noted.