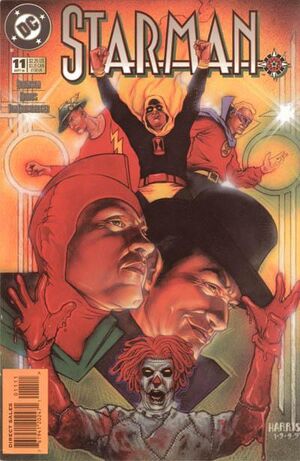 It was too much of a task for one man. Even one armed with the power of suns. Luckily Ted Knight had realized this. No one knew it at the time, of course, but Ted had been a true hero then. For the sake of his city, He'd swallowed his pride. And he'd picked up the phone. And made some calls.

Appearing in "13 Years Ago: Five Friends"Edit

Synopsis for "13 Years Ago: Five Friends"Edit

Shade writes in his journal how many years ago, Starman, Green Lantern, Hourman, Flash, and Dr. Mid-Nite fought off Ragdoll and his minions from Opal City. Even though Ragdoll was killed during the confrontation, his body disappeared from the morgue the following day.

Retrieved from "https://heykidscomics.fandom.com/wiki/Starman_Vol_2_11?oldid=1691767"
Community content is available under CC-BY-SA unless otherwise noted.