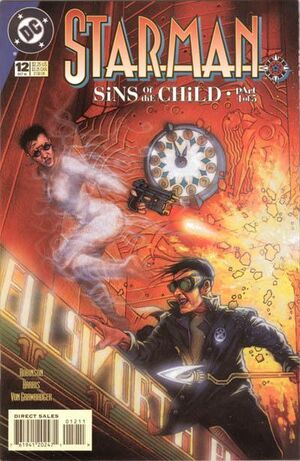 Incinerating the Mist's son? Yeah, it bothers me.

Appearing in "Sins of the Child, Part One: Jack's Day (The First Half)"Edit

Synopsis for "Sins of the Child, Part One: Jack's Day (The First Half)"Edit

As Nash goes on a killing spree, she also kidnaps Mikaal Tomas and Solomon Grundy. Later, she captures Jack Knight, strips him and places him in a labyrinth, telling him she has scattered his clothes and Cosmic Staff throughout the maze. To live, he has to run the maze.

Jack starts running and manages to take out one of Nash's aides before being surrounded by three more.

Retrieved from "https://heykidscomics.fandom.com/wiki/Starman_Vol_2_12?oldid=1698088"
Community content is available under CC-BY-SA unless otherwise noted.