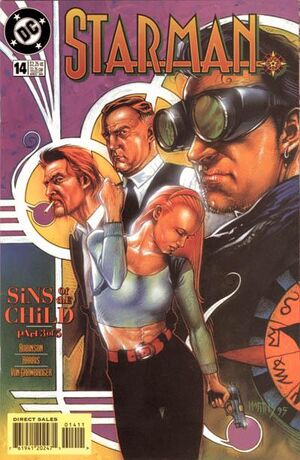 I've killed many myself. Many, indeed. But there's no excuse for beastliness. None whatsoever.

Appearing in "Sins of the Child, Part Three: The Opal's Day. The O'Dare's Day"Edit

Synopsis for "Sins of the Child, Part Three: The Opal's Day. The O'Dare's Day"Edit

Meanwhile, Clarence O'Dare stops a robbery, Mason O'Dare saves some hostages and Hope O'Dare chases another set of robbers across the rooftops. She is nearly killed by one of them before the Shade kills him instead.

Retrieved from "https://heykidscomics.fandom.com/wiki/Starman_Vol_2_14?oldid=1717972"
Community content is available under CC-BY-SA unless otherwise noted.