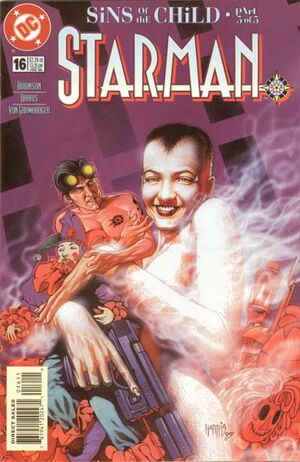 When you are Starman. Truly Starman. I'll come for you, my love. I'll kill you.

Appearing in "Sins of the Child, Part Five: Jack's Day (the Second Half)"Edit

Synopsis for "Sins of the Child, Part Five: Jack's Day (the Second Half)"Edit

Jack Knight makes it to the end of the Mist's maze. They confront each other, and she lets him go. She wants him to train and become a better hero, and she a better villain, then when they have fulfilled their destinies, she promises to return and kill him.

Retrieved from "https://heykidscomics.fandom.com/wiki/Starman_Vol_2_16?oldid=1458678"
Community content is available under CC-BY-SA unless otherwise noted.