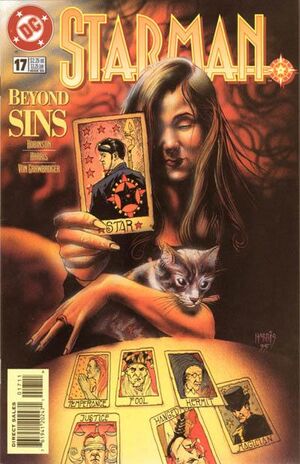 I've many. Ghost being the most apt nowadays. But once I was Jon Valor, a British nobleman, and once I was a privateer on the high seas. My name was the Black Pirate.

Shade and and a few members of the O'Dare family go after Damon Merritt. Meanwhile, Jack Knight speaks with Charity, a fortune teller, to see what the future holds for him.

Retrieved from "https://heykidscomics.fandom.com/wiki/Starman_Vol_2_17?oldid=1458679"
Community content is available under CC-BY-SA unless otherwise noted.