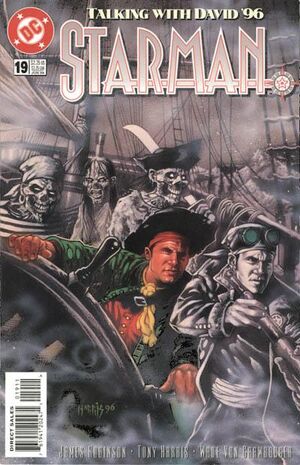 You said we were going to meet next somewhere different from a graveyard, but this is wacky, Bro.

Appearing in "Talking with David, '96"Edit

Synopsis for "Talking with David, '96"Edit

Jack Knight enters his deceased brother's monochrome world. As they talk with one another, they pretend to be pirates. Later, Jack meets with his deceased mom for an hour.

Retrieved from "https://heykidscomics.fandom.com/wiki/Starman_Vol_2_19?oldid=1458681"
Community content is available under CC-BY-SA unless otherwise noted.