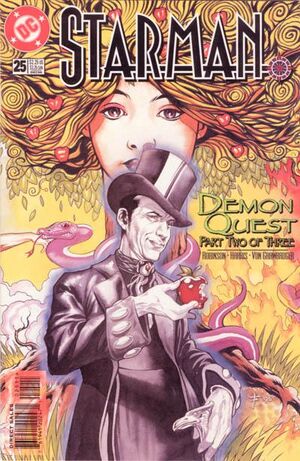 Appearing in "Hell and Back, Part 2"Edit

Synopsis for "Hell and Back, Part 2"Edit

The Shade and Matt O'Dare are lost in Hell due to the demonic villain Damon Merritt. Jack Knight and the O'Dare family ambush Merritt and his gang as he tries to recover a poster that is a demon's doorway to immortality. During the skirmish, Jack leaps into the poster in hopes of saving his two friends.

Retrieved from "https://heykidscomics.fandom.com/wiki/Starman_Vol_2_25?oldid=1458687"
Community content is available under CC-BY-SA unless otherwise noted.