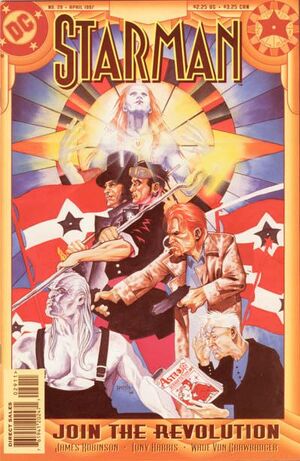 It's a real kick between the legs, isn't it just?

Appearing in "The Return of Bobo"Edit

Synopsis for "The Return of Bobo"Edit

When Bobo Bennetti is released from jail, he heads back to his hometown, Opal City. He's immediately put under surveillance by the O'Dare family and the Starmen clan. They believe he might rob a local bank. He does, or rather attempts too, but as he's about to announce his "hold-up," the Royal Flush Gang bust in and yell that they're holding the place up. Jack Knight crashes in for the rescue, but he doesn't know who's the "real" bad guy(s). He, and the now peeved Bennetti, team-up and play a little rough rummy with the gang. When the dust settles, the gang is hauled off to jail, and Bennetti is hired on as the bank's security officer.

Retrieved from "https://heykidscomics.fandom.com/wiki/Starman_Vol_2_29?oldid=1458691"
Community content is available under CC-BY-SA unless otherwise noted.