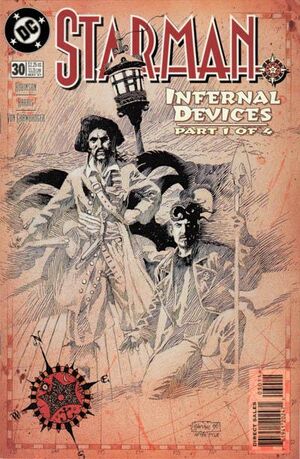 I got a call from Wesley this morning. He was at the airport. I think he feared someone might try to stop him. Crazy stunt for someone of his age to pull. That much travel. It will be the death of him. God, I envy him.

A mad bomber, the Infernal Dr. Pip, is planting his wares all over Opal City. Jack tracks the criminal down with a little help from his newly acquired stoolie, Dudley Donovan. When Jack confronts Dr. Pip, he almost gets himself killed, but the heroic ghost of the Black Pirate saves him.

Retrieved from "https://heykidscomics.fandom.com/wiki/Starman_Vol_2_30?oldid=1509093"
Community content is available under CC-BY-SA unless otherwise noted.