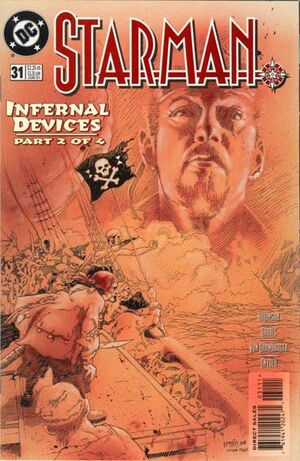 When you're hanging and choking, it's nice. Your neck hurts, but your head goes to a sleepy place, and below the belt everything comes to life.

A mad bomber, the Infernal Dr. Pip, is planting his wares all over Opal City. Jack tracks the criminal down, but he almost gets himself killed. The heroic ghost of the Black Pirate saves him, and later tells Jack his woeful tale of how his spirit became doomed to wander the city.

Meanwhile, Pip, learning from his near-defeat at the hands of Jack, recruits the sinister Copperhead to put the bite on Starman.

Retrieved from "https://heykidscomics.fandom.com/wiki/Starman_Vol_2_31?oldid=1458693"
Community content is available under CC-BY-SA unless otherwise noted.