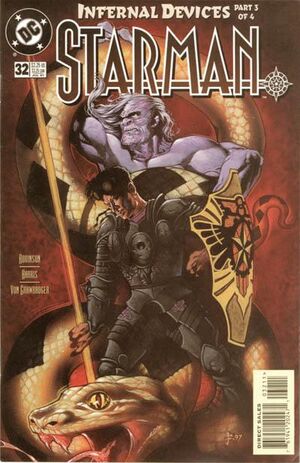 Ssso nice to be recognized! My ego thanksss you.

A mad bomber, the Infernal Dr. Pip, is planting his wares all over Opal City. Recently, he has also recruited the sinister Copperhead to put the bite on Starman. The two villains capture Jack, and plan to blow up a local department store, leaving Jack in the basement. Once again, Black Pirate's ghost comes to the rescue by rallying up the O'Dare family, as Jack stays to try and evacuate the building before it explodes.

Meanwhile, Solomon Grundy is down in the sewers fighting off the police until Officer Mason O'Dare asks Grundy to stop, as he too is a friend of "Jackstar". The two overhear the police call about the department store having a bomb and rush to the scene.

The store explodes, and while in flames, begins to collapse, trapping Jack and others inside. The ceiling begins to fall on the party, however, Grundy suddenly appears and holds the walls up as everyone rushes out to safety. Grundy is strong, but can't hold the weight of the building up for long, and he too collapses as the building tumbles on him.

Retrieved from "https://heykidscomics.fandom.com/wiki/Starman_Vol_2_32?oldid=1458694"
Community content is available under CC-BY-SA unless otherwise noted.