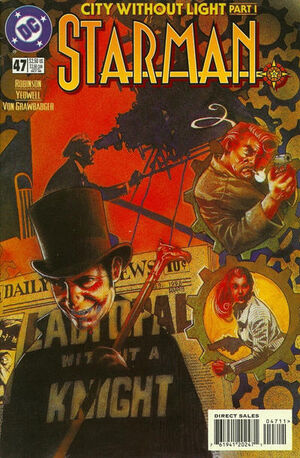 I find it strange that I'm the only one willing to question the Powers of those Heroes... Dr. Fate and the Spectre and the like. Yes, their abilities are fantastic. But are they nececcarily Supernatural? Are there no other Explanations? I think not.

Appearing in "City Without Light (A Prelude to Bad Times)"Edit

Synopsis for "City Without Light (A Prelude to Bad Times)"Edit

Retrieved from "https://heykidscomics.fandom.com/wiki/Starman_Vol_2_47?oldid=1458719"
Community content is available under CC-BY-SA unless otherwise noted.