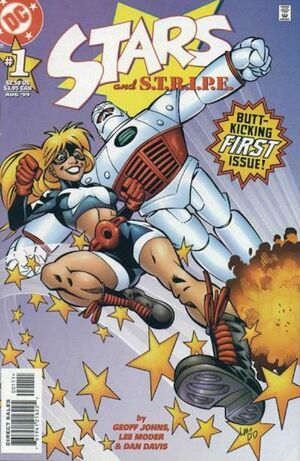 Appearing in "New Kid on the Block"Edit

Synopsis for "New Kid on the Block"Edit

Courtney Whitmore moves to Blue Valley, former home of Kid Flash, with her mother and her new step-father, Pat. While unpacking, she discovers that Pat used to be Stripesy, part of an all-American crime fighting duo in the 1940's. When Courtney puts on the old Star-Spangled Kid costume for a school dance, she becomes supercharged herself and becomes Blue Valley's newest teen hero.

Reprinted in JSA Presents: Stars and S.T.R.I.P.E. (Volume One)

Retrieved from "https://heykidscomics.fandom.com/wiki/Stars_and_S.T.R.I.P.E._Vol_1_1?oldid=1458804"
Community content is available under CC-BY-SA unless otherwise noted.