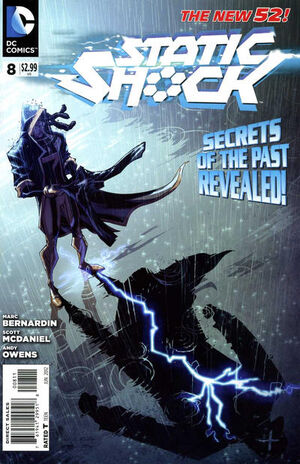 Static defeats a Metahuman girl who uses her powers over technology to try and kill those that have bullied her and subsequently commit suicide. He convinces her that while the pain she's suffered by being ostracized by both her peers and her parents hurts, it will fade eventually. He shocks her into submission to stop the scorpion-like machine she'd created around herself, removing her from it and telling a doctor on the seen to get her to the hospital and to contact S.T.A.R. Labs for assistance.

Soon after, he realizes he is late for school, only to be called into the counselor's office upon arrival. Ms. Sanchez tells him that, while he is a bright boy and far surpasses the standards in all his classes, he is still late or absent most days of the week. With some prompting, Virgil recounts his origins (leaving out parts of him being Static), talking about growing up in Dakota City and the accident that cloned his sister. During this, he texts Quentin and asks him to find a way to get him out of the office.

Once Virgil finishes his story, Ms. Sanchez reveals that she believes he may be involved with gangs or his parents may be abusing him. Clearly insulted, he attempts to walk out, but is told that he cannot leave without showing her his arm (which he had been rubbing earlier due to a scuffle on the subway) or she would call the police. He shows her, relieved that his healing factor had healed the bruise to the point of being able to pass off as dirt. Just then, the fire alarm rings, the school being evacuated due to a fire. Outside, Quentin reveals it to have been his fault due to an "accident" with chemicals.

This is the final issue of Static Shock.

Retrieved from "https://heykidscomics.fandom.com/wiki/Static_Shock_Vol_1_8?oldid=1458856"
Community content is available under CC-BY-SA unless otherwise noted.