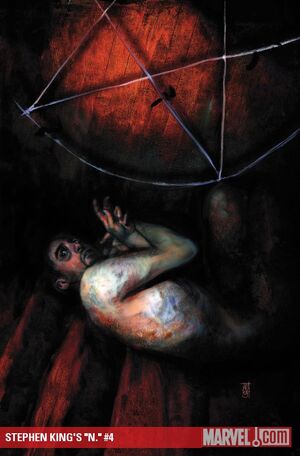 Patient Case Study: “N.” Subject initially complained of insomnia, stating that standard pharma was not having any effect. I will prescribe him something stronger. Subject is also open and frank about obsessive-compulsive tendencies, most notably; he has a habit of counting, and speaks of “good” and “bad” numbers. Traces symptoms back to visit of certain field in rural Maine with a rock formation that changes in number. Calls it a “faded place” where he could “tear through the fabric of reality.” Also recalls a “grinning figure trapped within the stones.” Suggests strong bouts of delusion. Prognosis: stronger sedative, intensive continued therapy. DON’T MISS THE NEXT EXCITING CHAPTER IN THIS LANDMARK COMIC-BOOK EVENT. FROM THE MIND OF STEPHEN KING, ADAPTED BY MARK GUGGENHEIM AND ALEX MALEEV, “N.” WILL HAVE YOUR PULSE RACING!

Retrieved from "https://heykidscomics.fandom.com/wiki/Stephen_King%27s_%22N.%22_Vol_1_2?oldid=1454504"
Community content is available under CC-BY-SA unless otherwise noted.