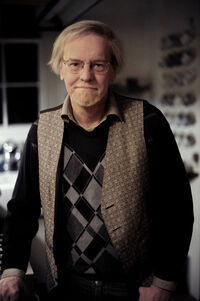 Steve Moore was a British born comics writer and occultist. He was a lifelong friend and something of a mentor to Alan Moore, though the two were not related. He died on 16th March 2014, aged 64.

Moore worked for most of the more significant British comics publishers, creating the Future Shocks format for 2000AD (as well as working on many other 2000AD strips including Dan Dare), working extensively for Warrior magazine on characters including Axel Pressbutton and Father Shandor, and writing many of the early strips in Doctor Who Weekly/Monthly and Hulk Comic for Marvel UK. He created the fan favourite characters Abslom Daak-Dalek Killer and Kroton the Cyberman, and also wrote various stories featuring The Doctor, the Hulk, Ant Man and Nick Fury, amongst others. He later worked extensively in American comics, mostly for independant companies but also on occasion for Marvel.

His work was also reprinted by Eclipse Comics.

Moore was credited with showing acclaimed writer Alan Moore (no relation), then a struggling cartoonist, how to write comic scripts. His career has subsequently been quite closely linked with the more famous Moore – the pair collaborated under pseudonyms (Steve's pseudonym was "Pedro Henry", Alan's was "Curt Vile") on strips in the 1970s and 1980s for Sounds magazine, including one which introduced the character Axel Pressbutton, who was later to feature in the Warrior anthology comic, as well as a standalone series published by Eclipse Comics.

Moore has long been linked to Alan Moore, who has known him "since he [Alan] was fourteen" referring to him as "a friend... fellow comic writer [and] a fellow occultist",[2] Moore and Moore have so often been linked together that Alan joked that Steve would have 'no relation' engraved on his tombstone [3]

Moore was an editor of Bob Rickard's long-running UK-based "Journal of the Unexplained," Fortean Times. In later years, he also edited that publication's more academic sister-publication Fortean Studies. He is listed as a 'specialist contributor' to the Chambers Dictionary of the Unexplained, which also notes that he compiled the Fortean Times' General Index, and several derivative books. He was a freelance writer on diverse topics, and said he "lives in London [where he] interests himself mainly in ancient and oriental subjects".[4]

Steve Moore began working for Odhams Press' comics division while still in his teens and in 1971 he created the UK's first comics fanzine, Orpheus. Moore's comics work has featured in most of the major British comics, particularly in anthologies. He has been involved with 2000 AD from its earliest days, writing the second story-arc of their Dan Dare-revival "Hollow World" (Progs 12–23), and devising the Future Shocks format for Prog #25 with his "King of the World".

He wrote the earliest adventures of the Doctor for Doctor Who Weekly (later Doctor Who Magazine), as well as co-creating the character Abslom Daak (with artist Steve Dillon) for the same publication. (Many stories were reprinted by Marvel and Marvel UK, including as back-up features to Jamie Delano's Captain Britain in The Daredevils.) Also for Marvel UK he wrote Hulk and Nick Fury, Agent of S.H.I.E.L.D. stories in Hulk Comic.

He also wrote several stories in Warrior, including, as Pedro Henry, a revival of his Axel Pressbutton character from Sounds.

He was featured in the anthology A1 (including a strip with fellow-Fortean Hunt Emerson on "Fortean Times" in #2), alongside comics luminaries.

He wrote the novelisation of the film V for Vendetta, based on the comics of the same name, by Alan Moore and David Lloyd.

In 2006 Alan Moore released a biographical essay on Moore called Unearthing, which in 2010 became an audiobook.

At the time of his death, he was co-writing The Moon and Serpent Bumper Book of Magic with Alan Moore, planned to be published by Top Shelf.[5]

Steve Moore had an abiding, and scholarly, interest in the history and mythology of China. Somehow, in the early 1980s this came to the attention of Bob Guccione who commissioned a three-part series on 'Brothels of the Orient' for his soft-porn magazine, Penthouse. Steve objected that he had never even been to the Far East, let alone resorted to its brothels. Guccione's advice was to 'just make it up.' While Moore found the subject matter distasteful, he was promised a very substantial fee. Consequently, Moore accepted the commission on condition that it be published under the pseudonym 'Pedro Henry.' This somewhat improbable name was an amalgam of Pedro McGregor (author of 'Brazilian Magic,' a book which he was reading at the time) and O. Henry, the short-story writer. Unfortunately, the articles appeared under Moore's own name, causing him no little embarrassment. He claimed that his subsequent use of the 'Pedro Henry' pseudonym was an attempt to distance himself from Steve Moore the lascivious denizen of oriental houses of ill-repute.[6]

Moore was also a dedicated student and practitioner of the I Ching and consulted it every morning, without fail, from 1969 onwards, recording the results in his 'I Ching diary'.[7] In 1988, he published "The Trigrams of Han: Inner Structures of the I Ching". This scholarly work was sufficiently impressive that it led to his induction into The Royal Asiatic Society as a Fellow.

His work has been published by Eclipse Comics in the US, much of it reprinted from Warrior. He wrote most of the stories for John Bolton's Halls of Horror, as well as Axel Pressbutton and Laser Eraser and Pressbutton.

Alan Moore wrote a long biographical essay about him, entitled "Unearthing", which is included in the Iain Sinclair-edited anthology London: City of Disappearances.[9] In early 2008, it was reported that this essay was being adapted into a "photo-illustrated hardcover novel, with some fumetti elements and visuals by Mitch Jenkins," to be published by Top Shelf Comics.[10]

Later work includes Hercules: The Thracian Wars at Radical Comics which Peter Berg has optioned in conjunction with Universal Studios and Spyglass Entertainment.[11] He is following that with Hercules: The Knives of Kush, a 5-issue limited series set in Egypt.[12] Moore said this was his final comics work for now, although he was still writing in other areas:

In October 2011, Moore released a novel, Somnium: A Fantastic Romance. The book was published by nthposition press, and released as a Kindle e-book through Amazon.com on 22 Oct. The story follows a young man who is trying to write a book based on the legendary romance of Endymion and the moon goddess Selene. What follows is a metaphysical and metafictional adventure which asked the question, is everything a dream within a dream?

Work done at the Fortean Times includes editing and writing the following.

Retrieved from "https://heykidscomics.fandom.com/wiki/Steve_Moore?oldid=1548930"
Community content is available under CC-BY-SA unless otherwise noted.