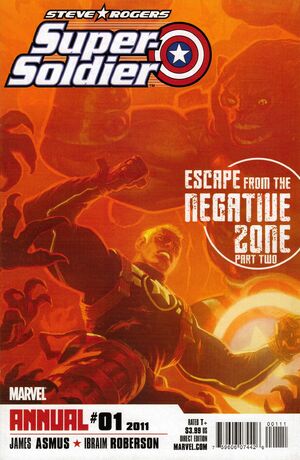 Appearing in "Escape from the Negative Zone, part 2"Edit

“Escape from the Negative Zone!” Continued from the X-Men Annual! STEVE ROGERS! X-MEN! NAMOR! Steve Rogers goes on an interdimensional rescue mission after the X-Men find themselves imprisoned by Blastaar! But the Negative Zone alien isn’t the biggest problem that the #1 Avenger and the X-Men are going to face. The most visually spectacular Marvel story in years is not to be missed! This issue, IBRAIM ROBERSON (X-MEN: SECOND COMING) joins writer JAMES ASMUS for the latest chapter of this blockbuster. Part 2 (of 3)

Retrieved from "https://heykidscomics.fandom.com/wiki/Steve_Rogers:_Super_Soldier_Annual_Vol_1_1?oldid=1651014"
Community content is available under CC-BY-SA unless otherwise noted.