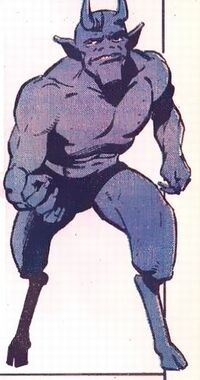 Base Of Operations
Stonus V

Stonians are a race of space gargoyles native to the Stonus star system. Having conquered and destroyed several worlds in their system, including their home world of Stonus V, they fixed their attentions on Earth. A massive Stonian named Gorgolla brought a phalanx of slave warriors to Earth centuries ago. They secreted themselves in hidden locales across the globe awaiting the day when Earth would ready for takeover.

An American explorer named David Hartnell discovered Gorgolla's roost in the Himalayas and acccidentally awakened him. Gorgolla summoned his brethren ready to continue his plans of conquest. The other slave-warriors however, having observed humanity's sense of compassion, rebelled against their leader and seemingly killed him.

A short time later, Gorgolla's father, Granitor sent agents to Earth on a survey mission. Granitor sought to reform the planet, naming it Stonus VI. Granitor's efforts earned the attention of It, the Living Colossus who had merged its essence with a human named Bob O'Bryan. It succeeded in defeating Granitor.

Years later, Gorgolla returned, having survived his encounter against his fellow gargoyles. He was one of dozens of strange creatures who became part of a top secret military detachment dubbed Nick Fury's Howling Commandos.

Stonians are extremely long-lived and their silicon-based anatomy grants them superhuman strength and stamina. Many of them can also fly by way of a pair of large bat-like wings.

Type of Government: Monarchy
Level of Technology: Interstellar teleportation
Cultural Traits: Some are warlike and contemptuous of other races, others are peaceful and benevolent
Representatives: