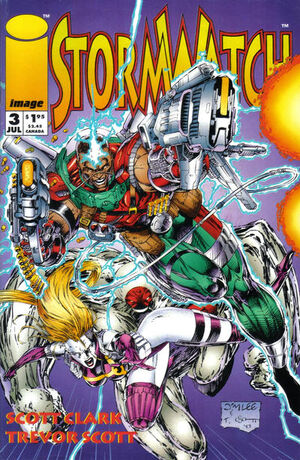 Upon arriving at Chernobyl, Cannon relates Stormwatch Two’s brutal defeat, including Ion’s death, to Battalion’s team.  In the reactor core, Regent holds Fahrenheit and Winter captive, having impaled Winter with control rods to prevent him from using his energy absorption powers.  Regent boasts of his intent to conquer Earth and reveals the Chernobyl meltdown was due to his first attempt at entering this dimension.  Aboard Skywatch, Weatherman One has deployed a ship ready to obliterate the Chernobyl site as a precautionary measure.  Cannon and Battalion’s team make their way through the complex and find Lancer’s remains along the way.  At last, they breach the reactor core and engage Regent.  As an additional precaution, Weatherman One orders Maj. Diane LaSalle to prepare to awaken the Warguard.  In the Skywatch infirmary, Malcolm meets Col. Marc Slayton a.k.a. Backlash, Stormwatch’s training officer.  Back in Chernobyl, Diva frees Fahrenheit, and they manage to stagger Regent.  Winter drains his energy as both teams concentrate their fire on him.  Beaten, Regent vows revenge and teleports away.  Weatherman One calls off the precautionary strike as Fuji appears, announcing he put back the control rods and stabilized the reactor.  StormWatch regroups, victorious and ready to depart.