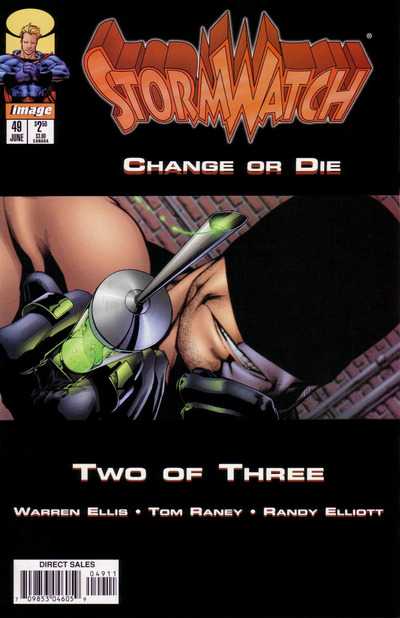 Appearing in "Change or Die: 2 of 3"Edit

Synopsis for "Change or Die: 2 of 3"Edit

Blind of the Changers tortures Malcolm King to get information about Stormwatch. The High flies to a United Nations building to speak to the media. He informs the world that he is going to change the world and save it from itself. Henry Bendix learns of The High's location and sends Stormwatch Prime after him. Fuji, Hellstrike and Winter battle The High, but he is able to escape after a destructive battle. While Stormwatch controls keep a trace of The High, Stormwatch Prime returns back to Skywatch to be handled by the medics. Henry Bendix learns that the Changer's headquarters are in a jungle in South America and sends all his forces there, calling all the members of Stormwatch except for Jenny Sparks, who he mysteriously wants her to be ignorant to the whole situation.

Retrieved from "https://heykidscomics.fandom.com/wiki/StormWatch_Vol_1_49?oldid=1475240"
Community content is available under CC-BY-SA unless otherwise noted.