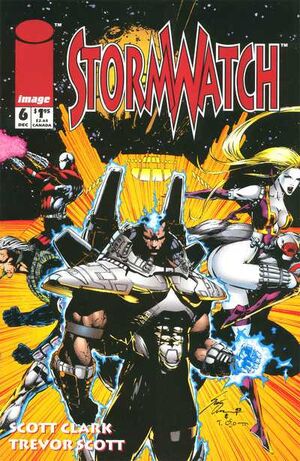 Stormwatch One (Battalion, Fuji, Winter, Hellstrike and Diva) has a more down to earth mission assigned when they are tasked with the mission of enforcing sanctions leveled against a terrorist nation by the peace keepers of the world. When whispers of captured former teammates reach Battalion he Fuji and Hellstrike venture into the terrorist nation, against protocol and run up against the band of mercs lead by Deathtrap.

Retrieved from "https://heykidscomics.fandom.com/wiki/StormWatch_Vol_1_6?oldid=1472279"
Community content is available under CC-BY-SA unless otherwise noted.