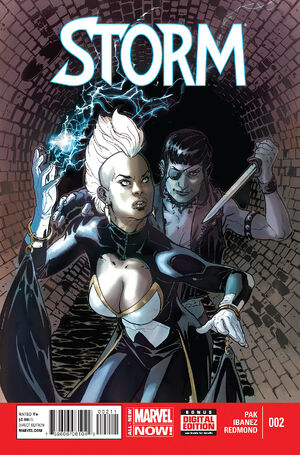 • STORM is on a mission to use her extraordinary powers for the betterment of not just mutantkind, but the entire world.

• When wayward youth start disappearing from the streets of New York, Storm is reminded of her own past as a thief and decides to investigate.

• But little does she suspect that the culprit behind the disappearances is one of her oldest foes: CALLISTO!

Retrieved from "https://heykidscomics.fandom.com/wiki/Storm_Vol_3_2?oldid=1645192"
Community content is available under CC-BY-SA unless otherwise noted.