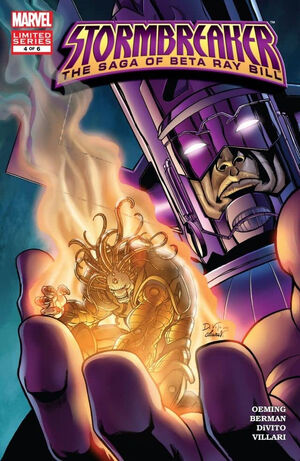 I loathe to deal with you, murderer, but it seems I have no choice. Once we have dealt with this monster I will give you no quarter. There will never be peace between us.

Stardust and Beta Ray Bill float unconscious, while Asteroth revels in her newfound freedom. She flies off to feed, and leave destruction in her wake. Meanwhile, Galactus has taken Alpha Ray, and begins to imbue it with the Power Cosmic. Stardust and Bill awaken and renew their fight, but Stardust convinces Bill that they must stop Asteroth first, and describes exactly what she is and will do. Bill agrees, and they fly off after her. They catch her and drive her into the core of a planet, causing it to completely explode. Amidst the rubble, Stardust tells Bill to take cover, and he summons a black hole in an attempt to sweep Asteroth away. Asteroth doesn't seem to be affected by it at all, instead she twists the gravity of it and it begins to draw in Bill and Stardust.

Retrieved from "https://heykidscomics.fandom.com/wiki/Stormbreaker:_The_Saga_of_Beta_Ray_Bill_Vol_1_4?oldid=1454541"
Community content is available under CC-BY-SA unless otherwise noted.