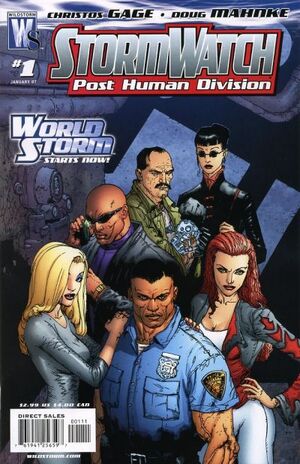 Appearing in "In a New York Minutes"Edit

Synopsis for "In a New York Minutes"Edit

With his list of new Stormwatch prospects compiled, Jackson King hits the streets to begin the interview and recruiting process. One by one, each candidate is approached and questioned regarding their involvement in deadly post-human battles.

The chat King has with each recruit is simple. He wants to know how each survived. After assessing the skills each prospect used to survive their ordeal, King figures how best to motivate them to join his new Post Human Division.

His first candidate is Officer John Moran of the NYPD's 18th precinct. He is asked to recall the massacre that resulted from a battle with post-humans a month ago: The battle erupted from a routine police check on an abandoned adult video store used by the homeless as sanctuary. When two officers investigated, they found the place to be occupied by post-humans who reacted with deadly force.

The event claimed the lives of more than 400 people, including 43 police officers, and a member of Stormwatch.

Officer Moran was called to the scene within minutes only to witness the murder of many of his fellow officers. Despite lacking post-human abilities, Officer Moran used quick thinking and creativity to survive encounters with Cooler, who had earlier defeated Fahrenheit during the crisis, and Pagliacci, a sword and knife wielding psycho with a reputation for killings hundreds of men.

King next visits Fahrenheit, a former Stormwatch Prime member, to see how much of the battle she remembers. Fahrenheit has just awoken from a three-week coma suffered from a long fall, during her battle with Cooler. She learns that she has lost her heat powers due to her injuries.

Though she did not participate in the massacre, Gorgeous was in a car parked not far from the scene, waiting for her boyfriend The Walking Ghost, who was part of the massacre. King reveals to Gorgeous that he understands her roll as the moll of the underworld. Jackson thinks Gorgeous is smarter than the men to whom she plays a subservient role, and is willing to pay her for her knowledge of the criminal underworld.

Next up is the Machinist, whom Jackson remembers from his days as Battalion. Jackson busted the Machinist in his first mission twenty years ago. Now age 40, the Machinist is still associated with the post-human criminal element. He, too, was at the massacre. He played company to the post-humans in the adult book store before the violence erupted. King points out that the Machinist is guilty by associating with the criminals, which also violates his parole. Understanding the hole he's in, the Machinist strikes a deal with Jackson to avoid jail time – just as planned.

Black Betty is the next to be visited. Jackson wants to know a bit more about her involvement in the battle. As assistant to mage Jeremiah Cain, who was traveling dimensions as the time, Betty helped Stormwatch Prime's Winter defeat the Ferryman. Jackson is at a loss when it comes to the mystic arts, and expresses a need for Black Betty's knowledge.

A trip to FBI headquarters in Quantico, Virginia scores King a visit with Dr. Mordecai Shaw in the forensics lab. King gets Dr. Shaw to talk about the time he was experimented upon by Lord Defile, which activated Dr. Shaw's repressed alter-ego, the Monstrosity, a green, six-armed monster whose rage causes mass destruction. King offers Dr. Shaw a chance to get back at Lord Defile and his associates for their violation.

Last up is Paris, whom Jackson finds at a Stormwatch Stormforce training facility. Jackson approached Paris to offer his condolences for the loss of her crew. But Paris brushes it aside; he never got to know his crew on a personal level.

Paris and his unit were dispatched to assist Stormwatch Prime during the massacre. During the battle, Deathtrap stabbed Stormwatch operative Blademaster through the heart. When Paris's unit intervened, they were cut down by Deathtrap, whose powers of weapons manifestation and mental control surprised the team. Each was shot in the head, except Paris who destroyed the manifested guns, causing a psychic backlash to Deathtrap, and sent him on the run.

Jackson has bad news for Paris: because Stormwatch's budgets are being slashed, Paris has lost his job to the Halo Corporation's Spartan model robots. But Jackson also has good news: Paris can join his new Post Human Division.

At a news conference, Jackson King announces to the world his new Stormwatch Post Human Division. His New York City team will serve as a pilot program for what eventually should give birth to Post Human Divisions in every major U.S. city.

Jackson introduces each member to the media and explains they're area of expertise:

Unbeknownst to King, his new endeavor already starts off at a disadvantage. Lord Defile has planted a mole on his team.

Retrieved from "https://heykidscomics.fandom.com/wiki/Stormwatch:_Post_Human_Division_Vol_1_1?oldid=1473237"
Community content is available under CC-BY-SA unless otherwise noted.