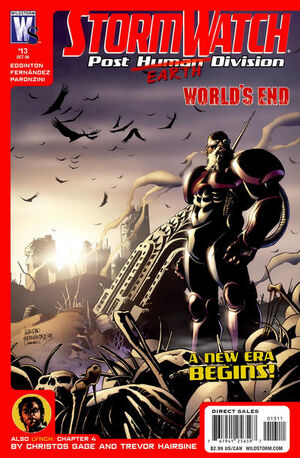 Listen, we're off rotation. I've got half a bottle of scotch malt in my quarters and John Wayne in The Quiet Man on DVD. Why don't you come join me and kick back? I'll be a perfect gentleman-- scout's honor. Or are you too busy polishing your halo?

Skywatch III is in orbit above the recently devastated Earth. Thanks to tech and weapons expert Link, the station is able to charge up using solar energy. This has become an issue because Jackson King has been draining the station's power at accelerated rates trying to get as many survivors off the planet's surface and onto the space station. With Christine Trelane at his side, they must prioritize which areas to help first. King sends down Team Omega which consists of Deathblow, Flint, and Fahrenheit. They help liberate some slaves from a fortified camp on the edge of Lake Superior. Things turn ugly when Gaia attacks. Gaia Rothstein is the first recognized century baby (other than Jenny Quantum) but was driven mad by the destruction of the world and became a force of nature that manifested into the form of a giant monster. Team Omega and the former slaves leave, and stranding behind the slave drivers to Gaia's mercy. As Team Omega left, Gaia placed her dead pet goldfish near the lake. Once back on Skywatch III, Team Omega takes a well deserved break.

Back on Earth in North Korea, a super powered dictator called Paragon keeps the local populace in line with his show of power. They even go as far as sacrificing their own to stay in favor with him.

Retrieved from "https://heykidscomics.fandom.com/wiki/Stormwatch:_Post_Human_Division_Vol_1_13?oldid=1473256"
Community content is available under CC-BY-SA unless otherwise noted.