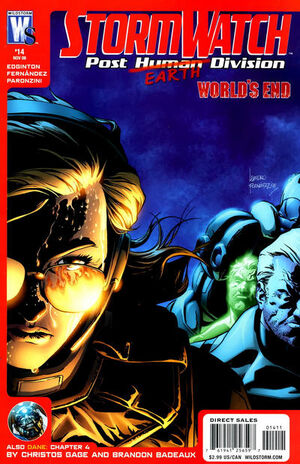 That would've rattled my teeth...if I had teeth! Or a head to put them in!

With the help of survivor intel planet-side, Stormwatch identifies three superhumans who now rule North Korea- Virtuous Maiden, Might of the People, and their leader Paragon. They discover that these three superhumans recharge themselves by cannibalizing the people that follow them. As if that wasn't enough of a problem, they also discover that a huge portion of North Korea's population survived by being led into bunkers. They are now being organized into a large army.

Jackson King decides to send Team Alpha which consists of Fuji, Hellstrike, and Winter, to defeat the superhumans and bring them back to Skywatch. Team Alpha defeats them but to their surprise the citizens defend the three superhumans and their actions claiming it is for the good of their country. King reluctantly orders Team Alpha to stand down and return to Skywatch.

But King doesn't give up. Christine Trelane is sent back down to North Korea. She gets the attention of the three superhuman and asks them to join Stormwatch. They refuse claiming that only the strong should survive now and that they will not stop their ways. King reveals it was a trap and the three are teleported into cold space where they perish instantly.

Christine regrets what she did but King felt there was no other way. They assess that Skywatch will not be able to hold many more refugees. To King's surprise, Christine suggests that they talk to The Authority.

Jackson Dane makes it to the throne room of Kabras, who thinks Dane is purposely committing suicide to bring him down. But Dane reveals he has the head of the Gorgon and begins to turn the creatures all the stone. But before Dane can turn the Gorgon's head on Kabras, Hellstrike appears and teleports him and Dane to Skywatch.

It is revealed that Dane was working with Stormwatch because Jackson King wanted The Night Tribes gathered in one place with Kabras alive to keep them there. When Dane asks why, Jackson asks why Dane wanted a favor from him in the first place. Their powers prevent them from reading each others mind so neither one divulges their plans.

Dane is teleported to Virginia where he begins his search for John Lynch.

Retrieved from "https://heykidscomics.fandom.com/wiki/Stormwatch:_Post_Human_Division_Vol_1_14?oldid=1473259"
Community content is available under CC-BY-SA unless otherwise noted.