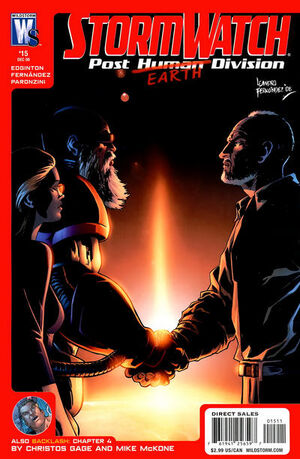 Jackson, they're just civvies, trying to track a super clocking a hundred miles an hour plus. They used a police highway radar gun, so give them some credit!

Somewhere in Seattle, Jon Drake, field commander of the British unit The Establishment, is being hunted by techno-organic hybrids from the Church of Gort. They are after a HALO Battery he has and intend to kill him to get it. Fortunately, Drake has a stolen distress code for Stormwatch which he uses. Shortly after, Stormwatch Team Omega shows up and liberates him. Drake demands to see Jackson King at once claiming he has important information.

Meanwhile, The High is in Finland delivering refugees to the area protected by the Masking Wall. After dropping off one group of refugees, he sets off to find more.

Back on Skywatch III, Jackson King and Christine Trelane continue to discuss the growing problem of overpopulation concerning the refugees on the station. Christine once again suggests talking to The Authority and asking for their help but King is hesitant because of The Authority's reputation. Before it can be discussed further, Jackson and Christine meet with Jon Drake. He tells them about the Soviet Science Cities and relays the history of these places used for experimentation and weapon development. He informs them that such a facility still exists and it houses a weapon known as a War Golem. It is a weapon designed to activate when doomsday occurs and it's mission is to wipe out the opposing country. In this case, it's target is the United States of America.

Marc Slayton realizes that he will not make it to the hatch before the explosives he set detonate. He braces for the explosion but none comes. He deduces that one of the creatures may be intelligent enough to have disarmed the explosives. He decides to increase the levels of oxygen in the facility and ignite them with a spark. As he tries to finally exit the facility, the creature that disarmed the bomb reveals itself and uses it's mental powers to freeze Slayton. But Slayton has one trick left up his sleeve as he activates his energy whips and ignites the oxygen causing the facility to go up in a ball of fire.

After narrowly surviving the blast, Slayton sets out to find out what caused the facility to shut down in the first place. He sees a ruined city in the distance and then sees the message indicator on his hand from John Lynch. He realizes that the end of the world has come and decides to answer Lynch's call.

Retrieved from "https://heykidscomics.fandom.com/wiki/Stormwatch:_Post_Human_Division_Vol_1_15?oldid=1473262"
Community content is available under CC-BY-SA unless otherwise noted.