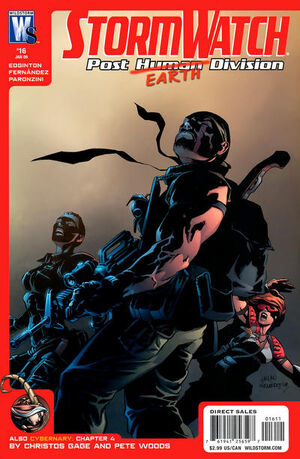 Why spend millions building computers when you can hardwire some poor bugger's brain?! Yard sale in a plumbers' merchant, more like a car crash in a butcher shop!

Led by Jon Drake, Stormwacth teleports into Russia where the War Golem is housed in an underground facility. The team prepares to enter the facility when the War Golem emerges and destroys the facility. They are about to engage the Golem in combat when Jackson King orders them to stand down. He wants to capture the machine because it feeds off the apocalyptic conditions of the world. King determines that if they capture it they can reprogram it to intake all of the Worldstorm effects and use them to create a power source.

Deathblow, Fuji, Link, and Drake get inside the machine while Winter and Hellstrike keep it distracted outside. They find missiles with bio-chemical markings. The Golem activates its internal defenses but Flint and Fuji are able to hold them off. Winter, Hellstrike and Fahrenheit try to damage the machine from the outside but it keeps attacking them and shows no sign of slowing.

The bio-chemical weapons activate and King finally orders the team out. He then orders the team to incinerate the machine but Drake disagrees claiming it would drop it's payload before they could stop it. He tells King he's found another way to stop it as he comes across something interesting in one of the machine's chambers.

They find a man hooked into the machine's system. His brain is acting as the Golem's central processing unit. Drake sees some data banks on the wall. After reviewing them Link realizes that they are memories that are fed into the man's body so he has no idea what has really happened to him; like a movie replaying in his mind.

Link deduces that playing a scenario which will show the man that he "dies" will shut down the machine. His hunch is right and the Golem shuts down and Winter uses up the stored energy he had from fighting the machine to destroy it.

Back on the station, Drake bids Stormwatch farewell and King decides it's time to meet with The Authority.

Kaizen Gamorra desperately tries to hold off the attacking Reapers while he waits for Cybernary to make her decision. She finally steps in and helps Kaizen destroy The Reapers. He asks if she will stay with him and help rebuild the world together. Cybernary reluctantly agrees. Kaizen announces to his people that the rest of the world has been destroyed as the Island of Gamorra begins to ascend, protected by it's force field. Kaizen declares it New Gamorra, the last superpower on Earth.

Retrieved from "https://heykidscomics.fandom.com/wiki/Stormwatch:_Post_Human_Division_Vol_1_16?oldid=1473265"
Community content is available under CC-BY-SA unless otherwise noted.