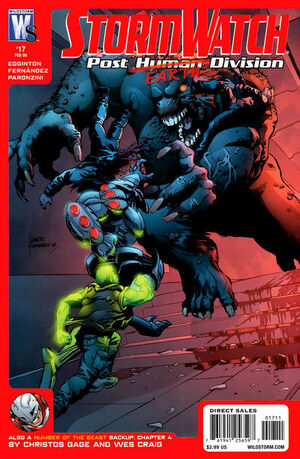 It's ironic. We've lived with the Apocalypse for what feels like...forever. It's become the norm. We press on day after day. One objective to the next. It actually gives our lives structure! Yet, it's when the clouds clear and the Earth looks as it once did, blue and perfect, that the enormity of our task sinks in. How do we fix a broken world?

Appearing in "A Day in the Life"Edit

Synopsis for "A Day in the Life"Edit

Jackson King and Christine Trelane discuss the growing problem of overcrowding aboard Skywatch III because of the constant influx of refugees from Earth. On the planet's surface, Fuji, Winter, and Hellstrike gather up another group of refugees and await their turn to teleport back to the station. Suddenly, a couple of Incubites attack and the team requests an emergency teleport back to the station. Unfortunately, the Incubites get caught up in the teleporter and hitch a ride back to the station. Just as the group arrives, the Incubites reach their fifteen minute limit and explode. Fuji and Hellstrike are immune to contamination but King orders the surviving refugees into quarantine. As the medical team examines the remains of one of the Inubites, the quarantined refugees succumb to the infection and mutate into Incubites themselves. Fuji and Hellstrike help contain the outbreak by taking out one of the creatures. After a fierce fight they succeed in killing it after a breach in the hull sends them out into space. Their immunity to the void of space allows Fuji and Hellstrike to survive.

Deathblow and Fahrenheit track down and finish off the last of the monsters. As Fahrenheit burns the Incubite body, Deathblow sees John Lynch's Team 7 signal but is interrupted before he can get to it.

Jackson King surveys the damage with the rest of the team. They find a young boy who was one of the refugees they brought aboard. He was also one of the refugees exposed to the Incubites and under quarantine. Even though he had not yet turned, King makes a tough choice and teleports the boy to the middle of the Australian Outback, much to Christine's horror. King claims that the boy was dead anyway and reminds her once again that they now need The Authority's help.

Missile Man confronts Miles Craven about the super-powered beings he's holding in the Number of the Beast program. Craven tells him that it was necessary to keep the world safe. When Missile Man tries to attack him a young Gabriel Newman stops him. As Missile Man loses consciousness he hears Craven tell him that he'll introduce Missile Man into the program.

In the present, Missile Man finishes telling the inquisitive stranger his story and tells him that when he woke up from the program, the world had ended. Plus he found out that Miles Craven and Gabriel Newman were dead.

Retrieved from "https://heykidscomics.fandom.com/wiki/Stormwatch:_Post_Human_Division_Vol_1_17?oldid=1473267"
Community content is available under CC-BY-SA unless otherwise noted.