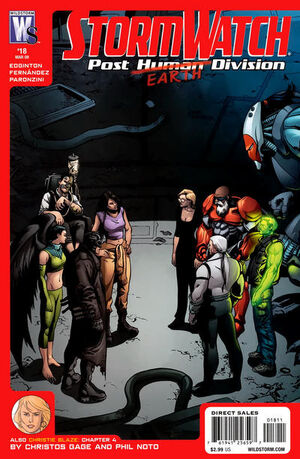 Is that why you insist on wearing the damned Battalion armor all the time? Paranoia? Insecurity? Well armor of no, you need to hose it out because it's starting to stink!

Appearing in "Guess Who's Coming to Dinner?"Edit

Synopsis for "Guess Who's Coming to Dinner?"Edit

The Engineer and Swift of The Authority are chasing a man through The Carrier. The man desperately tries to get a Stormwatch emergency teleporter to work as he continues to run.

Aboard Skywatch III, a technician makes Christine Trelane aware of the signal coming from the emergency teleporter. Christine is surprised to see it's coming from The Carrier. Jackson King enters the room and tells Christine he has the situation under control. They leave together and he tells her that he sent down spies to infiltrate The Carrier without Christine's knowledge. She becomes angered by this and accuses him of putting the whole station at risk because of his paranoia. Despite her anger, Christine accompanies King and Alpha Team (which consists of Fuji, Hellstrike, and Winter) as they teleport aboard The Carrier.

Deep within The Carrier, Link works to figure out how to re-energize the ship. Midnighter appears and tells Link it's not safe to wander around The Carrier alone. Fuji, Hellstrike, and Winter arrive to check on Link. Midnighter calls for a truce between the two groups declaring that they need each other now and bad blood can't serve them in this new world. Both sides agree and they begin work on reconfiguring one of The Carrier's spires to receive solar energy from Skywatch III's reservoirs.

With The Carrier reactivated, Eidolon and his army see it and decide to attack. The members of Stormwatch and The Authority on the ground engage Eidolon's army. Christine and Angie monitor the situation from inside The Carrier and Chrisitne calls for reinforcements from Skywatch III which include Deathblow and Flint.

Eidolon confronts Fuji and ruptures his containment suit. As Winters tends to a dying Fuji, Eidolon enters The Carrier.

As Marc Slayton, John Lynch, and Christine Blaze hold on for dear life, the entity that possessed Dominique Faust vanishes. Faust is unconscious but alive. Blaze thanks them both for helping but asks them to leave quickly before Faust awakens. As the two men leave, Lynch tells Slayton that he's decided to call Team 7 together.

In a remote location somewhere in Canada, Lynch and Blaze meet up with Deathblow and Backlash. Grifter appears with fellow ex-Team 7 members Stewart Phillip Chang and Alexander Fairchild. Grifter is leery about the meeting so he tells Lynch that whatever it is, it better be good. Lynch tells them that he wants them each to have a receiver planted in them that will serve as a way to contact all the ex-members of Team 7 if there ever were a global catastrophe. Grifter reluctantly agrees.

In the current day ruins of Charlottesville, Virginia, Lynch and Blaze stand and wait to see which Team 7 members will answer his call. He then asks her if she thinks they will be able to stop Tao from gaining control of The Creation Wheel. She says she believes that no one else can.

Retrieved from "https://heykidscomics.fandom.com/wiki/Stormwatch:_Post_Human_Division_Vol_1_18?oldid=1473269"
Community content is available under CC-BY-SA unless otherwise noted.