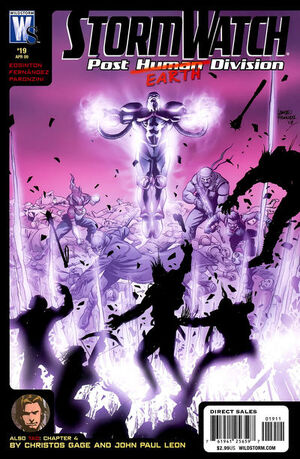 I'm sorry. I'm sorry we've failed you. We wanted to make a finer world for you all...and we failed. We've tried to put things right...but it wasn't enough.

Outside The Carrier, the battle between Stormwatch and The Authority against Eidolon's Army of the Mad rages on.

Within the The Carrier, Angie desperately tries to escape from Eidolon; pleading with the nanites in her blood to activate.

Winter tries to tend to the injured Fuji as Deathblow, Flint, Midnighter, and Fahrenheit contend with the endless waves of Eidolon's soldiers. They decide they need to call a teleportation door to get Fuji out and Winter tells Fahrenheit to create a perimeter using her flames. Fahrenheit is hesitant because of the horrific damage it will inflict on Eidolon's men; claiming their minds have been twisted and they are still just people. Jackson King arrives and tells Fahrenheit to stand down and let him deal with the army. As King verbally apologizes to Eidolon's men for failing to save the world, he begins to gather energy. Recognizing that it was survival that drove them to Eidolon, King nevertheless makes a final declaration that Eidolon's way will end today. He unleashes a massive amount of energy that tears through a vast majority of Eidolon's army as if they were nothing. The assault is such a tremendous display of power, that even the other members of Stormwatch and The Authority are in awe of it.

In The Carrier, Angie's nanites have reactivated allowing her to turn into The Engineer. She blasts Eidolon into a pile of flesh. But to her horror, Eidlon resurrects himself and continues his fight against her. Suddenly, The Carrier begins to awaken. It assesses the situation and helps Angie out by opening a teleporation door (much to Angie's surprise) which she proceeds to kick Eidolon through and out into The Bleed. Christine Trelane finds Angie and she explains what happened. Then Swift and Hellstrike arrive telling them about Fuji.

With Eidolon gone and the remnants of his army on the run, the heroes gather around the fallen Fuji. King contains the wound but fears that Fuji might be damaged beyond repair. Christine tells Angie to use her nanites to repair Fuji's containment suit. Angie uses her knife to cut her hand and lets her silver nanite blood flow onto Fuji's suit, repairing it.

Later, Link and King observe Fuji's condition. Link isn't sure if he can help Fuji, but then Hellstrike offers for Link to use him to try and help since he and Fuji's powers are similar. Christine shares information with Angie about keeping the two teams in contact with each other to continue their refugee rescue efforts. Midnighter asks Winter to keep an eye out for the missing Apollo. The Stormwatch team then says their goodbyes to The Authority and teleports back to Skywatch III.

On the station, King asks for Christine's forgiveness for lying to her about monitoring The Authority. She says it'll take her time to get past this and that she hopes there are no other secrets he's keeping from her.

Meanwhile, in Finland at The Masking Wall, The High continues to bring refugees. As the The High prepares to leave, a young girl named Ava who was part of a group of refugees he helped earlier runs over to see him, much to the displeasure of the armed guards at the entrance to The Wall. She tells The High that she wishes he could come inside The Wall and show everyone that supers aren't bad. He reminds her that The Masking Wall won't let people with powers past. As the guards demand that she return inside, she hugs The High and discretely hands him a note. The High flies off and once he's a safe distance away from The Wall, he opens up the note which simply reads, "Help us".

Appearing in "The Tao of Tao - Part 4"Edit

Synopsis for "The Tao of Tao - Part 4"Edit

As Tao restraints the defeated Providence, she asks him why he would want to rule the world as a barren wasteland. He tells her that the world is not barren to him, just chaotic. But he intends to change that. He tells her he's looking for the artifact called The Creation Wheel which gives it's wielder the power of a god with the means to shape reality in his image. He tells Providence that by having Void and herself, they are just two of the embodiments of primal energy that activates The Wheel and that he only has one more being to capture.

Somewhere in the South Pacific, Max Faraday and his wife Susannah Chaste, are enjoying their honeymoon on the beach. His best friend Devan Lawless and Max's sister Jenny are with them enjoying themselves as well. Susannah asks Max, who is reading a newspaper, if "anything interesting is going on in the outside world?" (alluding to the fact that they are in a reality Max created). He tells her "nothing that matters" and teleports the newspaper away, obviously choosing not to do anything about the fact that he knows Armageddon has come to the real world.

Retrieved from "https://heykidscomics.fandom.com/wiki/Stormwatch:_Post_Human_Division_Vol_1_19?oldid=1473271"
Community content is available under CC-BY-SA unless otherwise noted.