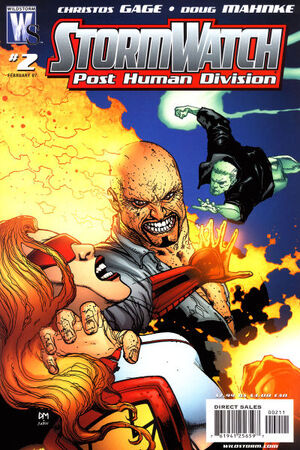 Stormwatch P.H.D. is assign on their first mission in capturing Russian mob boss, Grigori Tataryn aka The Walking Ghost, who possess the powers to change density and can become intangible. Tataryn, a Seedling, earned his powers when he was fireman during the Chernobyl disaster which possibly the radiation caused his powers to activate. He was among the superpowered criminals who participated in the New York massacre and escaped after battling against Fahrenheit and Hellstrike.

After sending the rest of P.H.D. to duties, John Doran privately talks to Gorgeous and the Machinist. John knows that Gorgeous is the lover of the Ghost and Dino being known to dealt with criminals, assigns to infiltrate the Ghost's organization. This earns protests from the two, which Doran assures them that their public identities on television were only broadcast to VIPs and other dignitaries until they are release to the public proven that they accomplish a good deed to justice. And as well earning John's trust in them. Gorgeous then immediately tells that Jackson King organize this plan which she protest him behind a reflective window.

That night, King shares this to his wife Christine Trelane and reveals that Gorgeous' 'hypervigilance' abilities was developed from her childhood from her abusive parents.

At the Machinist's home in Astoria, Queens Dino returns home to his mother and works in his basement workshop. He reflects from his discovery from Doran that Gorgeous is being paid, given that P.H.D. has no grounds in forcing her to work as she carefully stayed from any illegal activities, and in contrast Dino serves the opposite of Gorgeous' situation and being vouched from being imprison. He then receives a phone call from Johnny Too Bad who offers him a chance to meet the Walking Ghost.

Dino is held at shotgun point by the Ghost, who tells him that he is a spy. Dino, nervously, pleadingly explains to Tataryn that ever since fleeing from the New York massacre he needs the mob boss' protection from his former employer Slaughterhouse Smith, who despise people who ran out on him, and as well needing work. After hearing from Johnny Too Bad and Gorgeous, Tataryn condescend.

At P.H.D. Paris trains with Fahrenheit in physical combat. Paris hears from Lauren that ever since losing her powers, she also lost her career and friends from Stormwatch Prime.

Dino observes with John Too Bad during a heist committing by the Ghost's adjutant Dirty Bomb while fighting against Spartan robots. During and after escaping, Dirty Bomb shows admiration to Dino and explains that his past as the Machinist inspired him into becoming who he is. Following the heist, Dino present the Ghost A.I. chips that can be install in any Spartan robots to be under his control.

At P.H.D., the entire team lay out what they know about the Ghost's underlings. John suggests in needing Stormwatch Prime's involvement in handling the arrest given that P.H.D. is inexperienced. However, Gorgeous tells him that the Ghost will be leaving for Russia sooner than Stormwatch Prime's return from their mission in Afghanistan. This convinces John to take P.H.D. on the arrest.

At the Foxxxy Lady nightclub, P.H.D. take action with Dino spraying Dirty Bomb with a specialize retardant foam, Gorgeous tricks the Ghost to be suffocating from carbon monoxide, and Paris and Fahrenheit easily subdue Johnny Too Bad. Just as Doran and police officers storm the nightclub, the Ghost quickly regain conscious and helps Dirty Bomb, allowing him to create a explosion before everyone inside escape.

Later, John reports to Jackson King of P.H.D.'s actions in which no one was seriously injured during the scene. Despite the Ghost and Dirty Bomb's escape, Jackson tells John that he is impressed with P.H.D.'s action and that the operation was not an entire lost with Johnny Too Bad's arrest, and as well convincing Jackson's superiors in creating a second P.H.D. unit in Las Vegas. Which he offers John and his team to train the new unit.

Retrieved from "https://heykidscomics.fandom.com/wiki/Stormwatch:_Post_Human_Division_Vol_1_2?oldid=1473239"
Community content is available under CC-BY-SA unless otherwise noted.