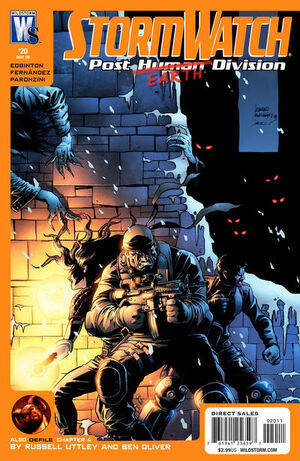 Link continues to observe Fuji who is still incapacitated from Eidolon's attack. Link tells Jackson that his observations have found that the molecular density of Fuji's containment suit is changing and soon none of their devices will be able to scan within his suit. He also shares with King that after taking a sample from Hellstrike to determine how his gaseous form works, he found that Hellstrike's body replenished the sample. Based on these findings, Link concludes that when The Engineer helped repair Fuji's suit, some of her nanites stayed in his suit and are vying for control with Fuji's gaseous form while it is trying to replenish itself. Hellstrike tells them to contact The Authority and get The Engineer back to help Fuji. But Jackson refuses, much to Hellstrike's displeasure, and he orders Hellstrike not to reveal this information to anyone else. Hellstrike begrudgingly agrees. Jackson tells Link to continue his work but to only answer any findings to him personally.

Jackson is summoned to the Watch Hall by Christine. She tells him that they've got an operate named Petra Marceau radioing for help near Constanta, Romania. Jackson calls for Team Omega (Deathblow, Flint, and Fahrenheit) to go down. Christine warns that weather interference may not allow them through. Deathblow tells them that they understand the risks and tells them to hurry up and send them down.

After a rough teleport, Team Omega regroups. They follow operative Petra's signal and find her held up in an abandoned building. But when they try to approach her they find she has been turned into a vampire. She attacks Flint but quickly ends up with a set of broken fangs and is promptly launched from view by Flint. Team Omega finds themselves surrounded and Deathblow realizes it was a trap set by the Night Tribes. Together, they tear through wave after wave of vampires. The team appears to be gaining the upper hand when Deathblow is shot by what appears to be lasers of some kind. As Fahrenheit tends to Deathblow, Flint sees that the vampires have an S.P.B. (Super Powered Being) on their side. She tries to fight him off but is unsuccessful.

Suddenly, a grenade with the symbol of a cross is thrown into the air. Sister Mary appears and Deathblow can't believe it. She tells them they must hurry because that was her last Fiat Lux, Holy Light Grenade. She shows them that she's got Stormwatch teleport fetishes from the other operatives who were turned by the vampires. Flint grabs the vampire Petra and they all teleport back up to Skywatch III.

Once aboard the station, Sister Mary tells Jackson that the vampires intended to lure Stormwatch down one by one and eventually take Skywatch III. She also tells them that Wetworks and her group, The Order of the Cross, have been trying their best to stop the Night Tribes in Asia. But the cloud shell over the continent has allowed them to swell their number well into the tens of thousands. This has caused them to diminish their human food supply too quickly. Sister Mary and the others were hoping this would cause in-fighting amongst The Night Tribes. But since their leader Kabras has learned everything the Stormwatch operatives knew, he knows about the bunkers in North Korea (as seen in Stormwatch: PHD #14) and he intends to take them for The Night Tribes.

Lord Defile takes the artifact he got at Ellis Island and goes to where Rapier is hiding out. After taking out some of his henchmen, Defile proceeds to use the artifact against Rapier. He tells Rapier that he will do whatever he must to keep him from bringing a Daemonite force to Earth. He tells Rapier that Earth has been his for a millennium and he will not give it up.

But Rapier reveals to Defile that he didn't open a portal between Daemon and Earth...at least not until now. He needed an anchor in order to do it and he used Defile's mind as that anchor. Realizing he's been used, Defile threatens to kill Rapier but Rapier uses his Daemonite magic once again and...

...Lord Defile wakes up in his subterranean lair. But he remembers what Rapier did and vows to be ready for Rapier and his Daemonite forces.

Retrieved from "https://heykidscomics.fandom.com/wiki/Stormwatch:_Post_Human_Division_Vol_1_20?oldid=1473273"
Community content is available under CC-BY-SA unless otherwise noted.