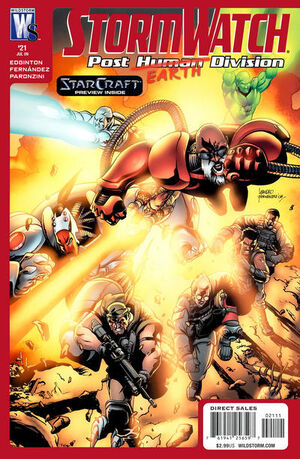 Jackson King mercilessly interrogates the former Stormwatch operative turned vampire, Petra Marceau. Christine steps in and tries to reason with Petra. But Petra tells her that she willingly gave herself to the Night Tribe vampires so they would turn her. Petra tells them that she believes the Night Tribes are the future of Earth, not humans. To everyone's surprise, King lets her go but tells her to take a message to Kabras that they're coming for him. Once Petra is back on the planet's surface, Link and his operatives track her.

In the Rocky Mountains, The High returns to his old lair. As he muses over countless relics displayed around his lair he comes to one in particular that looks like some sort of egg-shaped chamber. It is labeled "Purple Haze: Metagenic Mist Biohazard-Treat with Extreme Caution". The High removes his costume and enters the chamber, leaving the note he received from the little girl named Ava on the floor.[1]

Back on Skywatch III, King and the others continue to track Petra as she goes deeper into the ranks of the Night Tribes. Suddenly, her signal is lost. A scan reveals a Wetworks symbiote in the vicinity and they realize it's Jackson Dane.

Dane has confronted Kabras in his own throne room and has brought the head of the Gorgon which turns anything that looks upon it to stone. But before Dane can get to Kabras, Hellstrike teleports in, grabs Dane, and both are teleported back to Skywatch III.

Once aboard, Dane questions why King teleported him when he was so close to defeating Kabras. King tells him that he needs Kabras alive and he wont' tell him anymore unless Dane tells him where he was going. Neither man can read the other's mind because of their powers so both men remain silent about their agendas.

Back in Romania, Kabras finds a Stormwatch teleporting fetish on Petra who was one of the vampires turned to stone.

King debates with the others as to why he wants Kabras alive. King wants the total eradication of the Night Tribes from the face of the Earth. Link tells him that regardless of them being an enemy, the genocide of any race is wrong. The team is divided on the issue but Deathblow reminds them all that it's a moot point because they can't fight against the combined might of the Night Tribes. King disagrees and says they've got one who can...Winter.

King explains that Winter has some sort of anchor to the universe that allowed The Doctor to bring back the members of Stormwatch that were thought killed[2] Winter says he still has a connection to the sun but is afraid to tap into that power because the last time he did, he almost destroyed Earth.[3] But King reminds Winter that The Doctor told them the nature of the universe had changed.[4] Christine tries to use her powers to active Winter's ability to a higher power level but is unable to. The only other option is to put Winter into a situation of high stress which has also been known to activate latent abilities.

Winter is teleported in the middle of a horde of vampires. He engages wave after wave of them but his powers do not seem to grow. Disheartened and fearing he will be overwhelmed, Winter requests to be teleported back to Skywatch III. But King tells them to leave Winter on the surface. Link and Christine can't believe what King is ordering. To stop them from bringing Winter back, King destroys the teleport controls.

On the surface, Winter pleads for King to teleport him back. But when he realizes it isn't going to happen, an enormous amount of energy emits from his body incinerating the vampires and everything else for miles around him. Winter stands alone at ground zero.

Out in space, some unknown force monitors the situation.

Retrieved from "https://heykidscomics.fandom.com/wiki/Stormwatch:_Post_Human_Division_Vol_1_21?oldid=1532926"
Community content is available under CC-BY-SA unless otherwise noted.