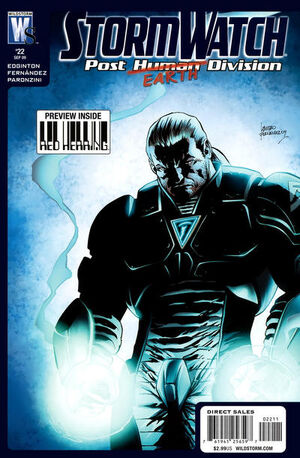 Aboard Skywatch III, Jackson visits with Winter about the incident in what used to be Romania (see last issue). Winter blames King for what he perceives as not just the annihilation of the Night Tribes, but also of dozens of innocent people who were probably caught in the blast. King stands firmly by his decision and tells Winter to get over it.

In Norway, Team Omega rounds up some refugees to teleport back to the station. But before they leave, Deathblow senses something is out of place. Unable to find anything, the team teleports away with the hostages. Shortly after, a tarp buried in the snow uncovers and the bodies of several people who have obviously been executed is revealed.

At his secret Headquarters in the Rocky Mountains, The High emerges from the egg-shaped vessel labeled "The Purple Haze". After exiting, The High notices his nose is bleeding from the fall he took out of the vessel. He then walks over to a row of humanoids he identifies as Highpernauts. He activates Highpernaut One and has it give him a run down of The Purple Haze's effects. In essence, it has taken away The High's powers. The Highpernaut also explains that the effects are reversible but only within ten days. The High tells the Highpernaut that if he does not return it is to seal off the mountain and incinerate everything so his technology won't fall into the wrong hands. With that, The High leaves in a helicopter from his collection of vehicles.

In Link's lab, Hellstrike carries on a conversation with Fuji whose suit has completely encased him in an oval-shaped structure. As the two discuss Fuji's condition they segue into discussing King's actions of late. Both Link and Hellstrike disagree with King and as Winter enters, he lets them both know that he agrees with them and asks what are they all going to do about it.

Retrieved from "https://heykidscomics.fandom.com/wiki/Stormwatch:_Post_Human_Division_Vol_1_22?oldid=1473275"
Community content is available under CC-BY-SA unless otherwise noted.