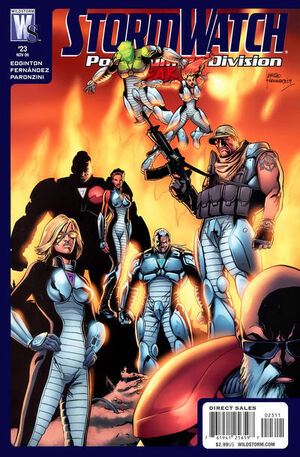 And that, my friends, is what you get when you throw a bunch of nanoscopic engines and a gaseous post-human life form into a blender!

Skywatch is a drift in orbit, crippled after saboteurs calling themselves the Knights of Khera detonated explosives within the station. Jackson King and Christine Trelane scramble to piece together what happened as the station is in chaos.

As the station plummets towards Earth, Christine urges Jackson to evacuate the survivors but he refuses to abandon Skywatch. Even though Jackson claims he can fix things, Christine orders the evacuation.

Fahrenheit helps one group of refugees while Deathblow and Flint try to get another group to the escape pods. But their hopes are shattered when they find the pods have already been jettisoned.

Link is dying, trapped under some debris. Hellstrike elects to stay with him, feeling that their bid to save the world is over. Winter reluctantly agrees to let him stay but just as he's about to leave, Fuji bursts forth from the metallic casing that has covered his body for weeks. He emerges not as Fuji in his containment suit, but as a man completely covered in silver. Hellstrike and Winter are dumb-struck at the sight. But things get weirder as Fuji tells them he will stop Skywatch from burning up. A bright light emanates from Fuji and outside the station, a huge protective covering which looks like the metallic casing which previously covered Fuji envelopes the station.

As the station rights itself, injured people around the station, including Link, are healed by the same metallic substance. Fuji appears to King and Trelane. Before they can ask him any questions, he tells them that the explosive device was of Kheran origin.

Elsewhere, the Knights of Khera watch as Skywatch is saved. But they vow to continue with their mission of eradicating all life on Earth and founding New Khera.

Retrieved from "https://heykidscomics.fandom.com/wiki/Stormwatch:_Post_Human_Division_Vol_1_23?oldid=1473276"
Community content is available under CC-BY-SA unless otherwise noted.