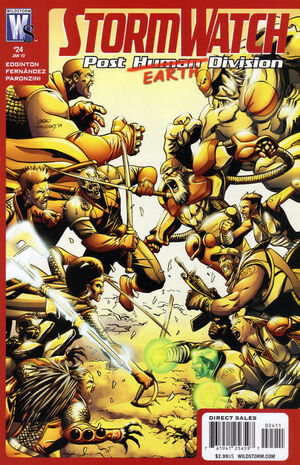 You know, I used to abhor the notion of firearms, but I'm starting to see the appeal!

The High (now powerless) is being pursued by the Knights of Khera. They corner him and wound him but he is able to breach The Masking Wall and teleport aboard Skywatch III.

Once stabilized, The High tells Jackson King that the Kherans have Finland and he made himself human to get past The Masking Wall. Once inside, The High found that it was a military state inside and people were slaves of the New Kheran Empire. It's said that the generator powering The Masking Wall somehow snagged a quantum tether and opened a rift into The Bleed. The legendary Kheran warship, The Red Blade emerged.

Ten millennia ago, the Kherans were fighting off an invasion from the Bleed. They were losing so Warlord Sebastian and his crew from The Red Blade drove the enemy back into The Bleed but were trapped there as well. But now that they've returned they want Earth as their new home. They have a plan to repair the planet but only those within The Masking Wall will survive the process.

What looks like rockets are launched from a hidden base on The Moon. They land in the North and South poles. King sends teams to both locations. Flint recognizes the structures as being similar to the terra-forming structures the god-creature used before The Authority killed it (see The Authority #12). Link figures out that they intent to switch off Earth's magnetic field which will expose the planet to the full radiation from the Sun, cauterizing the planet surface.

King orders the teams to destroy the devices but the Knights of Khera have already begun their attack. The Kherans prove too powerful for Stormwatch and are taken down. Sebastian contacts King and tells him he will engage King himself in order to finish him. On the planet's surface, The Red Blade emerges from The Masking Wall and heads straight for Skywatch.

King orders everyone teleported off the station. Link raises the storm door and sets shields to maximum. As The Red Blade draws near, they set Skywatch on ramming speed and teleport away as the station collides with the warship.

The High takes King and the others to his hidden base. But out in space amongst the floating debris, Sebastian survives.

Retrieved from "https://heykidscomics.fandom.com/wiki/Stormwatch:_Post_Human_Division_Vol_1_24?oldid=1509616"
Community content is available under CC-BY-SA unless otherwise noted.