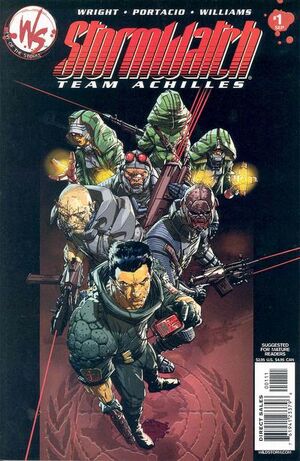 Appearing in "The Big Dance"Edit

Synopsis for "The Big Dance"Edit

Ben Santini and Blake Coleman, two former Black Razors, enjoy a run and some “freak watching” in New York on their way to work.

Just then, a squad of ambulances and police cars drives by and several fighter jets fly overhead. Santini thinks it’s weird and wonders were they’re headed. Both Ben and Blake realize it is the United Nations building. They head to the UN building and see a fire truck going in that direction. They try to hitch a ride but the driver, who obviously dislikes Stormwatch, superheroes, and anything related, tells them to go fly there. Coleman and Santini give them the team’s tagline: “We’re not superheroes. We kill superheroes.” And the firemen decide to give them a ride.

Santini and Coleman arrive at the UN building and find it under attack by a weird, beetle-like spaceship. While they try to get inside to get to their weapons, the pilot of the ship talks to a secret partner. The mystery person tells the pilot to kill Blake and Santini, and if he wants a bonus, to burn them to death. The Team Achilles members avoid the attacks and find their way into the sewers beneath the UN building. After taking a swim through sewage, Coleman and Santini get inside and find an armed superhuman waiting for them. The two of them attack the terrorist and beat him, using intelligence and superior fighting skills to beat the physically superior opponent. In the end, the super powered terrorist winds up with most of his bones and joints broken and a bullet from his own gun in his head.

Santini and Coleman work their way to another part of the base where they find Tefibi, their intel, tech, and weapons specialist, passed out on the ground. They wake him and find out that the attack on the building had shut down the power to the building and since the air wasn’t hooked up yet, Tefibi had run out quickly. Santini says he wants intel on the enemies, but they can’t get it without power to the computers. There’s an auxiliary generator but it’s not where they are. They have a teleporter but for some reason, he doesn’t want to use it. He sends Blake with Tefibi to fix the generator while sees to some injuries he got in the fight.

Unfortunately, since Stormwatch wasn’t supposed to be operational for another three weeks, they don’t have any weapons yet. There is some good news though. They have uniforms. Santini and Coleman get to the locker room and put on some clean Stormwatch uniforms. Along with his uniform, Blake gets a package that his grandmother had delivered: a large shotgun (Blake explained that his grandmother thought his career was to "hunt moonshiners," and was thrill to give him the weapon). After suiting up, Ben and Blake split up. Blake and Tefibi going for the generator and Santini putting on bandages.

On the way to the generator, Tefibi asks what the big deal with the teleporter is, and Blake says that if he’s lucky, he’ll never find out. They get to the generator and switch it on, but the man in the ship outside sees what they’re doing. He radios a terrorist inside the building and tells him to check it out, then tells the person he was talking to before that he wants to leave. The person on the other end of the line tells him that the whole point of the attack is to test Stormwatch: Team Achilles, and if he leaves, he gets no money.

Back in the halls of the UN building, Coleman and Tefibi come up on another terrorist. With surprise on his side, Blake puts a shotgun to the back of the man’s head and pulls the trigger. The blast doesn’t kill him though because his skull is made of metal. Since he’s not dead, they drag him to Santini for an interrogation. In the light of the room where Santini is waiting, they can see that the terrorist is exactly like the first one they killed. He’s either a clone or a twin. Santini is going to put him in a holding cell but those aren’t ready yet either. They improvise and tie him up using loads of duct tape.

By then, Tefibi has gotten the computers up and he can see what they’re up against. Three more terrorist inside, two more outside, and they have hostages. Santini tells Coleman to warm up the teleporter and start bringing the team in.

Retrieved from "https://heykidscomics.fandom.com/wiki/Stormwatch:_Team_Achilles_Vol_1_1?oldid=1475029"
Community content is available under CC-BY-SA unless otherwise noted.