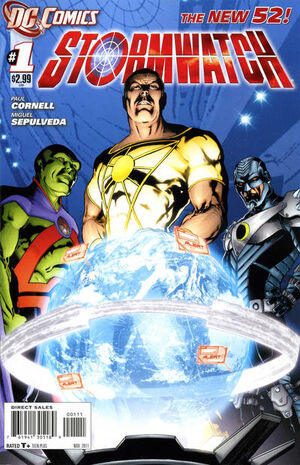 Do we look like superheroes? They're amateurs. We're the professionals.

Appearing in "The Dark Side, Part One"Edit

Synopsis for "The Dark Side, Part One"Edit

Stormwatch attempt to recruit Apollo, but he is having none of it. Meanwhile, Harry Tanner encounters a giant eyeball creature in a cave on the moon that refers to itself as "the first response to the sounding of the Horn." It tells Harry that something powerful and malevolent is coming and it is tasked with strengthening the targeted worlds to resist it. It attempts to take over Harry's body and use it as a host. Stormwatch attempts to recruit Apollo once more and Martian Manhunter battles him briefly until Midnighter incapacitates the heroes. Then, Midnighter offers an alliance with Apollo, who accepts.

Retrieved from "https://heykidscomics.fandom.com/wiki/Stormwatch_Vol_3_1?oldid=1501247"
Community content is available under CC-BY-SA unless otherwise noted.