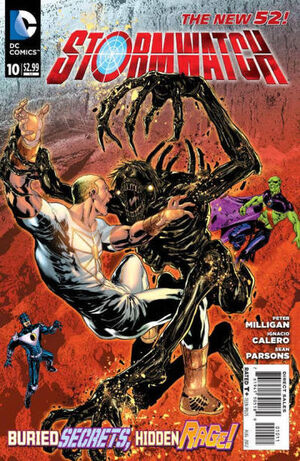 I think I created a temporary linac field that accelerated subatomic particles along a linear beamline. Nah, I don't really understand it either. Maybe by the end of the century it'll be in all the school science books.

Appearing in "Digging Up The Past"Edit

Synopsis for "Digging Up The Past"Edit

At the Eye of the Storm, the Engineer watchs the world. Over the last few months, the number of superhuman beings active on Earth jumped surprisingly, and she wants to know why. In Gotham, Jack Hawksmoor is investigating the legend of the Batman, but the city keeps telling him about owls. In Mumbai, Martian Manhunter is trying tto find one person in the city who allegedly has the powers of the goddess Kali. In Metropolis, Midnighter & Apollo have been tasked to find and identify Superman. Apollo seems to dislike secrets today.

Then, they are recalled. It seems that two hours ago, a mysterious artefact was pulled out of a French archeological dig. The team investigates and finds the dig leader, Professor Finlay, transformed into a freakish monster. Engineer identifies the device as a phreno-module and sends Midnighter to find it. Apollo tries to take down the dig leader but is thrown back. Engineer retasks him to block internet and mobile reception in the area, to keep the info contained. Midnighter finds the phreno-module buts is attacked by it mentally

At a secret base in Antarctica, Harry Tanner, the Eminence of Blades, is trying to convince his captive, Adele Benson, the Projectionist, to help him keep watch for Stormwatch. Whatever his plan is, it needs time to mature, and it will need a patsy to activate it. Benson tries to refuse, but Tanner says she's supposed to believe in him.

At Iron Heights Penitantiary, Tanner appears to a criminal known as the Fox, who was accused and convicted of a crime related to the Moon. Tanner offers the Fox a chance to get even, but before he can respond, he abducts the Fox.

In France, Stormwatch works to keep the dig leader occupied. Meanwhile, Midnighter is losing against the phreno-module, until Jenny Quantum shows up, asking him to apologise for trying to kill her in Pripyat. He refuses to apologise, but she saves him anyway. Midnighter, who still believes that she is too dangerous to live, maintains his original position: he will one day have to kill her.

With the device deactivated, the dig leader reverts to his human form. Stormwatch takes him back to the HQ for a medical assessment, and the Engineer tells the others about the origins of the phreno-module: in 1762, Stormwatch, after much internal debate, decided to break its long-held tradition of secrecy and reveal itself to the governments of the world as their protectors. It was a disaster, with an argument between Britain, France and Prussia about whose side they were on ultimately spilling into open war across two continents. Reversing its earlier position, the Shadow Council of Stormwatch built the phreno-modules and armed one side with them to quickly end the war, then confiscated the devices again and spent the next thirty years working to change recorded and remembered history, through a combination of heavy editing of the written record, mass hypnosis, and engineering the fall of the House of Bourbon. Within thirty years, all evidence of Stormwatch had been removed, and all anyone could prove was the official historical record. One of the phreno-modules must have been lost.

From that day on, Stomwatch has been a secret organiation, hiding the worst of existence from the general population. Apollo and Midnghter are sent to put the phreno-module in a danger cache. While there, Apollo tells Midnighter why he has been so angry all day: as a child, he had to hide his homosexuality from his parents and schoolmates. Now, as an adult, he is confident enough to not want to hide who is anymore. But his job in Stormwatch requires it. And so he must keep quiet.

Retrieved from "https://heykidscomics.fandom.com/wiki/Stormwatch_Vol_3_10?oldid=1473198"
Community content is available under CC-BY-SA unless otherwise noted.