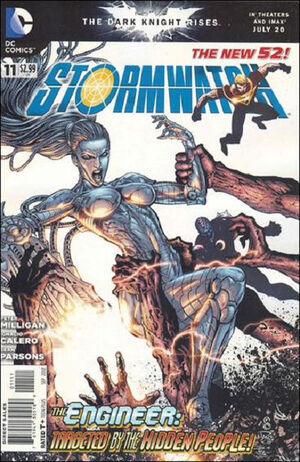 Name's Midnighter. And here's where I tear out your carotid atery.

In the distant past, the Neanderthals lost their war against humanity. The surviving remnants formed a secret society called The Hidden People with the intent to one day fight against humanity and win. Stormwatch has fought against them for centuries trying to keep them from achieving their goal.

By the present day, the Hidden People continue their quest at a local refinery where they gather gas for their weapon. Stormwatch is there but is unable to stop them before they get away.

Back at the Eye of the Storm, The Engineer searches for answers concerning The Hidden People. She begins to research the demise of the previous Stormwatch team which included Agent Luna, Big Band, Von Z, and her predecessor the original Engineer, Archie Trundle. As she scans Trundle's corpse for memories, she remembers how she became The Engineer after being involved in an accident that destroyed most of her body. She also remembers how her and Harry Tanner started a relationship and he helped her accept her new form.

Elsewhere, Harry Tanner is busy enhancing The Fox in order to become his new partner. The Projectionist taunts Tanner for the use of his powers and the scope of his plans. She then calls out his relationship with The Engineer and almost loses her tongue to his blade for it.

Stormwatch catches up with The Hidden People but they've completed their Devolver device and it starts devolving the teammembers. The Engineer absorbs the Devolver in order to shut it down and later, literally throws up its remains.

The Hidden People regroup and reveal that they wanted The Engineer to absorb the device and now they wait to see how it affects her.

Retrieved from "https://heykidscomics.fandom.com/wiki/Stormwatch_Vol_3_11?oldid=1473200"
Community content is available under CC-BY-SA unless otherwise noted.