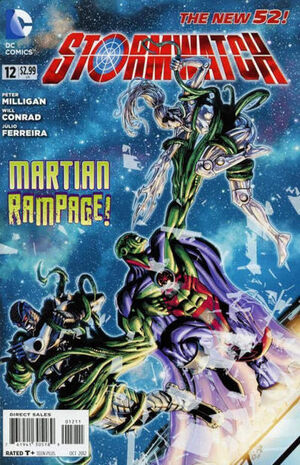 I've studied you, Martian. The way your face is built. I think if I hit you hard enough on the bridge of the nose. It'll push a piece of bone right back into your brain.

There is a strange phenomenon happening across the world where busts depicting Queen Nefertiti of Old Egypt are randomly appearing in different places. Meanwhile, The Martian Manhunter has taken it upon himself to begin mind-wiping the members of Stormwatch so they forget that he was ever on the team. One by one, he targets Jack, Jenny, and Apollo. Midnighter puts up a fight but Manhunter is able to mind-wipe him in the end. His last member of Stormwatch to go after is the Engineer but he was intercepted by the Shadow Cabinet. They bring him to The Island of Avalon, their base of operations. Manhunter comments that there's only three Cabinet members (remembering hearing that there four) angering them (especially when they learn he was trying to read their mind). Manhunter tells them that he is reluctantly leaving Stormwatch but he must continue on in secret without the others.

Now normally the Cabinet don't let members quit, they get into battle with the Shadow Cabinet. Manhunter asks them to consider breaking their rule this once, and while they agree, but not before getting Manhunter to agreed to give them something in return which they will ask for in the future. Back at The Eye of The Storm, the Engineer knew what Jonn was really doing and was helping Manhunter mind-wipe everyone. She says she understands his reasons but still wants answers about the Shadow Cabinet, Unfortunately Jonn told her it would be a futile effort since she won't remember any information he gives her. Reluctantly, she allows him to mind-wipe her too.

Meanwhile, Harry Tanner reveals the busts were just a distraction to get Stormwatch to leave him be for the time being (And leaving a lot of heroes confuse on the harmless busts). He has used the knowledge given to him from the Scourge of Worlds and intends to pose as the fourth Shadow Lord to defeat Stormwatch.

Retrieved from "https://heykidscomics.fandom.com/wiki/Stormwatch_Vol_3_12?oldid=1473202"
Community content is available under CC-BY-SA unless otherwise noted.