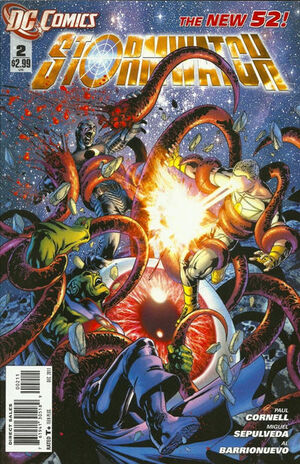 Appearing in "The Dark Side, Part Two"Edit

Synopsis for "The Dark Side, Part Two"Edit

At the beginning of the universe following the Big Bang, Adam One is afloat in the newly formed universe as someone or something talks to him telling him he will age backwards from the start of the universe.

During the present day aboard StormWatch headquarters, The Eye of the Storm in Hyperspace, the Engineer is upset that Adam One brought the giant alien horn on board. She makes a comment that she should be leading the team and Adam puts her in her place.

In Moscow, Midnighter is trying to get Apollo to join with him. But the Martian Manhunter shows them he faked being affected by Midnighter's attack and purposely listened in. He feels the team could use them both.

Harry Tanner, the Eminence of Blades tries to reason with The Scourge of Worlds and gets it to back off for long enough for some of his team to teleport to the moon. Meanwhile, Adam One arrives to welcome Midnighter and Apollo to the team. In order to mask this massive threat from the Justice League International, The Projectionist uses her powers to send out information that says a local villain is causing this and keeps them occupied while Stormwatch deals with the real threat.

The Engineer and Jenny Quantum teleport to the Moon's surface and The Engineer inserts a data miner into the moon to absorb all The Scourge's knowledge. But it only distracts it long enough to let Harry absorb all its knowledge instead. The Scourge retaliates by shooting meteors to Earth that have giant creatures inside them.

Retrieved from "https://heykidscomics.fandom.com/wiki/Stormwatch_Vol_3_2?oldid=1473183"
Community content is available under CC-BY-SA unless otherwise noted.