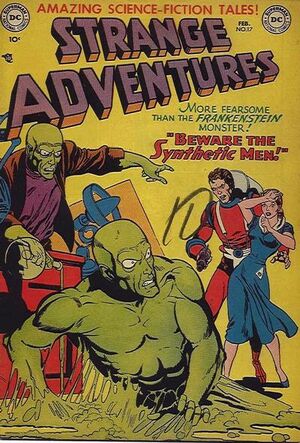 Appearing in "Beware the Synthetic Men"Edit

Synopsis for "Beware the Synthetic Men"Edit

The military begin to build a small army of "synthetic men," and five of them go AWOL. Captain Comet hunts them down and finds them devouring "food chemicals" in Utah. When Captain Comet confronts them, he is easily defeated and taken as their prisoner. Bound inside a warehouse, Captain Comet soon makes his escape and traps his foes inside. Acting quickly, he shoves a hose into the warehouse, pumping the place with oxygen. The synthetic men slowly harden, becoming stone statues. Captain Comet has defeated them by deducing that the men breathed pure nitrogen, and the synthetics couldn't survive pure oxygen. The combination of the two elements caused their bodies to form calcium carbonate -- marble.

Appearing in "The Last Days of Earth"Edit

Synopsis for "The Last Days of Earth"Edit

Synopsis for "The Brain of Dr. Royer"Edit

Retrieved from "https://heykidscomics.fandom.com/wiki/Strange_Adventures_Vol_1_17?oldid=1458957"
Community content is available under CC-BY-SA unless otherwise noted.