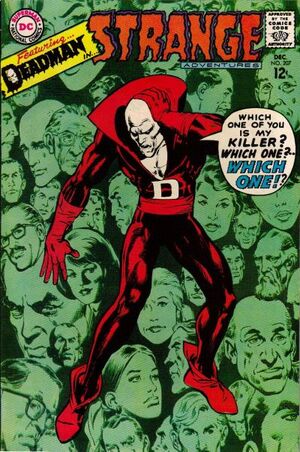 Appearing in "What Makes A Corpse Cry?"Edit

Synopsis for "What Makes A Corpse Cry?"Edit

Hill's Circus leaves town, and Deadman remains behind to check out another lead to his killing: Rocky Manzel, the thuggish owner of a discotheque called The Freak-Out. Some time before his murder, Boston Brand had befriended Liz Martin, a singer at the discotheque, and got into a fight with the jealous Rocky. After beating Manzel, Brand promised to come back and help Liz out of Rocky's clutches, but he was killed off before he could. Deadman returns to The Freak-Out and uses the body of Paul, a bartender, to expose a counterfeiting operation Manzel is running. However, he also learns that Manzel was in the hospital at the time of his murder so, he's not responsible for his demise. After seeing that Liz is safe with Paul and intends to marry him, Deadman returns to the search for his murderer.

Neal Adams won the 1967 Alley Award for best cover with this issue.

Retrieved from "https://heykidscomics.fandom.com/wiki/Strange_Adventures_Vol_1_207?oldid=1459147"
Community content is available under CC-BY-SA unless otherwise noted.